You Were Famous, Your Heart Was a Legend

Defying pressure to cancel a concert, Lana Del Rey says she will sing for the people of Israel because she is a singer and they are people

The sad and beautiful songstress Lana Del Rey will play her music for the people of Israel. She decided, apparently, that in the spirit of being a musician and playing music for the world’s many people in the many places where they live and gather, she would perform her music in Israel for the people who live there.

In a Facebook post urging Del Rey not to play the concert, Waters acknowledged that the singer would face a hard decision as “no doubt the Israeli promoters are paying top dollar, they are well known for that.” But if Del Rey could only see past that Waters implored, she might realize that no amount of sheckels thrown at her by conniving international bankers, would be worth it to take part in something as evil as playing music for young people.

On Instagram, where the cool and beautiful musicians hang out, Del Rey issued her own statement:

I would like to remind you that performing in Tel Aviv is not a political statement or a commitment to the politics there just as singing here in California doesn’t mean my views are in alignment w[ith] my current government’s opinions or sometimes inhuman actions.

In a followup post the singer wrote that her “views on democracy and oppression are aligned with most liberal views” and added “I will be visiting Palestine too and I look forward to meeting both Palestinian and Israeli children and playing music for everyone. I want peace for both Israel and Palestine.

Hopefully, she plays many concerts for the Palestinians, who ought to get the chance to hear her music, too.

Who owns a chanteuse and her tunes? Not any government or nation, not any cause, and certainly not an aging singer still charging gullible fans with bad taste to hear him rattle his osteoporotic bones in a macabre imitation of young people’s rock n roll music.

The thing to always keep in mind about Roger Waters is that his narcissistic rock opera bullshit in Pink Floyd was so shitty, his rock-messiah persona so obscenely pretentious, that his very shittiness was an engine to kickstart the British punk scene. 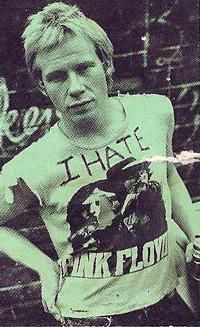 Del Rey on the other hand, recorded the only good cover of Leonard Cohen’s Chelsea Hotel No 2.