Rokhl’s Golden City: Jews don’t drink. Or do they?

We all know that on Purim, we are specially commanded to drink alcohol until we cannot tell the difference between Cursed Be Haman and Blessed Be Mordechai. And really, it shouldn’t take more than a drink or two, because, as everyone knows, Jews don’t drink. Right?

Consider, however, the Sefer ha-tikun, a late 19th-century commentary on the Shulkhan Orekh. It contains a mind-boggling enumeration of our many obligations to toast:

One is required to make a toast when he builds a house, sells a house, and when his house burns down. One must make a toast when he gets married. If the groom is a widow, he must drink for each wife; an elderly man who marries a virgin must drink forty-nine toasts. If the father of the bride refuses to drink a toast the couple must divorce; and the Polish Hasidim are accustomed to beating the recalcitrant father with his own slipper.

If that sounds like a lot to keep track of, there’s a handy rule of thumb (or is it three fingers of heuristic?): “The proper times to drink a toast … are day, night, Sabbaths, festivals—in fact every day except Yom Kippur, when food and drink are forbidden.”

That last quote isn’t exactly from the Sefer ha-tikun. It’s from Glenn Dynner, in his excellent study Yankel’s Tavern: Jews, Liquor, and Life in the Kingdom of Poland. And the Sefer ha-tikun isn’t actually a real commentary; it’s a piece of anonymous satire on the supposed excesses of Hasidic drinking culture in Poland at that time. The title is a pun on the kabalistic notion of tikun or cosmic repair and the Yiddish term trinkn tikn, that is, the custom of making toasts in honor of a yortsayt.

Traditionally, the kabalistic tikun was meant to “repair cosmic flaws by means of rituals, good deeds, study, penance, esoteric mindfulness.” The satirist behind the Sefer ha-tikun simply combined that with the Polish Hasidic tradition of copious shots. Just, so many shots.

If you have some familiarity with Yiddish texts of this era, you know that anti-Hasidic satire is incredibly common, and one should proceed with some caution when drawing conclusions from such exaggerated depictions of Hasidic life. At the same time, Dynner notes that the drinking culture depicted in the Sefer ha-tikun was not actually so far from the truth. The book points to what he quite soberly calls the “normativity of sacred toasting.” Moreover, Dynner insists, contemporary internal Hasidic sources confirm the picture of Hasidic drinking culture and trouble our notions of “Jewish sobriety.”

Jews don’t drink. In my mind’s eye I can see my parents’ liquor cabinet in our Long Island home. It’s a solid piece of laquered chinoiserie, the upper half of which is enclosed by glass doors with plinky brass pull tabs. On the glass shelf in the back dusty highball glasses and fancy stemware wait to serve at cocktail parties which will never come. A jumble of new and open liquor bottles are there, too, mostly well-meaning gifts. Maybe there’s a bottle of Bailey’s in there, a special treat my mom allows herself a few times a year. Together they give off the sour alcohol perfume found only in our liquor cabinet. To me it’s a domestic curiosity, the shabby but intriguing neighborhood we always drive by, but almost never visit.

It wasn’t until I graduated from college that I heard my first Yiddish drinking song, an event so momentous, apparently, it burned itself into my brain. It was at Tonic, during their Sunday afternoon klezmer brunch. The year was either 1999 or 2000, right after Christmas. The place was packed with folks who had come for Klezkamp and were still in town. Di Naye Kapelye was playing, itself an unusual event. They played Mikhl Gordon’s “Di mashke” (Whisky) and the combination of funky tsimbl grooves and party lyrics blew my little Long Island mind.

On account of whisky the singer’s father took his mother as a bride, and it was thanks to whisky that he himself came into the world. He goes on to recall the many happy occasions on which whisky made its appearance, including his own bris. From that point on, he says, he drinks a rov-kos (full cup), un dos rov-kos, on a mos! (and full cups, without number!)

Despite a popular image of the sober Jew who eschewed the tavern for the study house, Eastern European Jews most certainly had their own drinking culture and it was far more than a once-a-year Purim bender. Dynner argues that the most significant difference between Jewish and Polish drinking culture was that among Jews, especially Hasidim, drinking was done within a framework of religious gatherings and obligations. Given that such gatherings and obligations multiplied like (kosher) rabbits, the authorities did their best to regulate the party. The Hasidic commentator Hayyim Eleazar Shapira, for example, deemed wine essential to “attaining the required degree of joy on the Sabbath” and considered it a substitute for Temple sacrifice. Like others, he cautioned against excessive drunkenness, especially when pronouncing blessings.

My mind was blown again when I heard the Klezmatics recording of “Eyn mol” (One Time) a classic, table pounding shabes drinking song. In Voices of a People, Ruth Rubin writes that the singer in that song “seems to value his whiskey above all Sabbath fare and is gradually reduced to a state of inebriation in which he is no longer master of the situation …” The rabbis would not approve.

And yet, the idealized image of the sober Jew remained powerful, reinforced by both Jews and Christians. For various socioeconomic reasons, Jews were vastly overrepresented in tavern-keeping and alcohol distribution. As previously noted, Jews tended not to do the greater part of their drinking at taverns, reinforcing the nefarious image of the Jew profiting off, but not participating in, a culture of drinking.

Glenn Dynner writes that in the 18th century, “Polish reformers argued that Jewish tavernkeepers were not merely spiritually defiling; they were the direct cause of widespread drunkenness and ruin in the countryside, in particular, where Christians seldom ran taverns.” The problem was that liquor was big business in the Polish lands and landowning Polish nobility profited handsomely off its production and distribution. But the Jews were the public face of that industry, leading reformers to argue that the “peasants only drank excessively … because sober Jews enticed them into drunkenness in order to more easily dupe them.”

It took me years to figure out what can easily be summed up in one obnoxious galaxy brain meme: 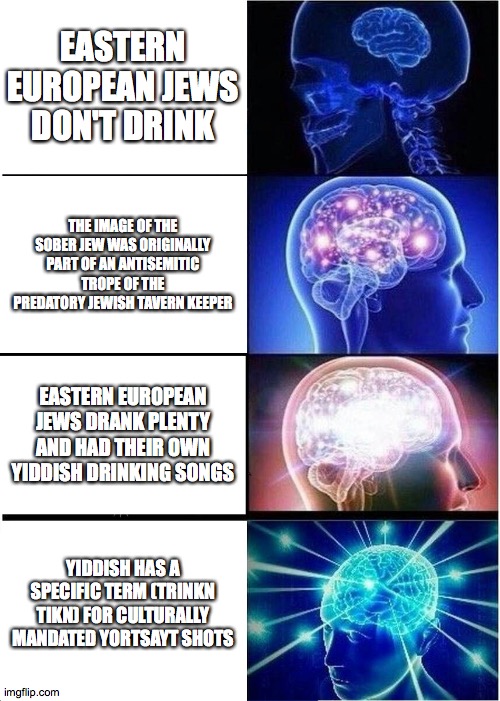 The years of great Eastern European Jewish immigration to America also coincided with the growing influence of the temperance movement and the call to outlaw alcohol. In the United States, “Jews who made a living selling liquor, or who defended alcohol’s legal availability,” writes Marni Davis in Jews and Booze: Becoming American in the Age of Prohibition, “unwittingly acted as flash points for American anxieties about immigration and capitalism.” Jewish association with the liquor trade was seen as proof that Jews were unassimilable and their values incompatible with American values. That tension only dissipated once mainstream America lost its panic over alcohol and Jewish representation in the liquor business became a historical curiosity. But old fears die hard.

In that light, I see our liquor cabinet, our suburban shrine to alcoholic ambivalence, somewhat differently. The performance of sobriety was an act of self-preservation, as much as assimilation. It feels like an appropriate place to reflect for Purim, a holiday all about the triumphant negotiation of those two things (and getting in a bangin’ feast if you can).

INDULGE: If you still want a glass of vodka after all that, allow me to recommend one of my favorite Krakow discoveries: Zubrowka Bison Grass Vodka. I often think about sitting on a sunny square in Krakow, drinking a cold glass of vodka and apple juice, and not worrying about a damn thing, at least until the glass is empty.

ALSO: I’m very pleased to say I’ll be moderating a program for the Museum of Jewish Heritage about female partisans and resistance fighters. “Heroines of the Holocaust” will take place on March 16 and you can register here … Also on March 16, I’ll be fulfilling my other life’s highest purpose: talking about Mandy Patinkin’s butt in Yentl. Register here … On March 21, you can get an early look at Ver Vet Blaybn, the new documentary about Yiddish poet Avrom Sutzkever made by his granddaughter, Hadas Kalderon, in partnership with the Yiddish Book Center. Register here … If you know anything about the klezmer scene today, you know anything with clarinetist Michael Winograd is going to be good. He’ll be doing an unnamed album drop on March 25 and you can register to tune in online, here … It’s become increasingly difficult to see the early klezmer revival documentary A Jumpin’ Night in the Garden of Eden. I had to buy my copy on VHS tape (!) from eBay. The Yiddish Book Center is hosting a talk with Jumpin’ Night director Michal Goldman on April 1, with the chance to stream the movie ahead of time. Required viewing for all klezmer fans … I don’t have a lot of strong matse opinions other than I don’t like it. Back when I was making law-firm money, I made damn sure that if I had to eat my bread of affliction, it was Yiddish Farm matzo shmura, the only matse I ever enjoyed, and the year’s most justifiable luxury purchase. Available for orders now … I will never not link to the classic Broadway cast recording of the Megilla of Itzik Manger.

Rokhl Kafrissen is a New York-based cultural critic and playwright.

See All→︎
When in Rome, Do as the Jerusalemites Do
byElhanan Miller
Baseball’s Golden Age
byTevi Troy
Ariel Helwani Won’t Back Down
byElie Bleier
Thank you for reading Tablet.

The Jewish world needs a place like Tablet where varying—even conflicting—viewpoints can exist side by side. Our times demand an engagement with big ideas and not a retreat from them. Help us do what we do.