On Aug. 12, conservative lawyer Leif Olson began work in the Trump administration’s Department of Labor. On Aug. 30, he resigned. Today, Bloomberg Law published the reporting that prompted his departure, a seemingly shocking exposé of his anti-Semitism. The only problem: The entire allegation was false. Simply put, poor reporting took Olson’s clear mockery of Breitbart and the alt-right and recast it as support. Here’s how.

A recently appointed Trump Labor Department official with a history of advancing controversial conservative and faith-based causes in court has resigned after revelations that he wrote a 2016 Facebook post suggesting the Jewish-controlled media “protects their own.”

The piece includes these screenshots from Olson’s Facebook page: 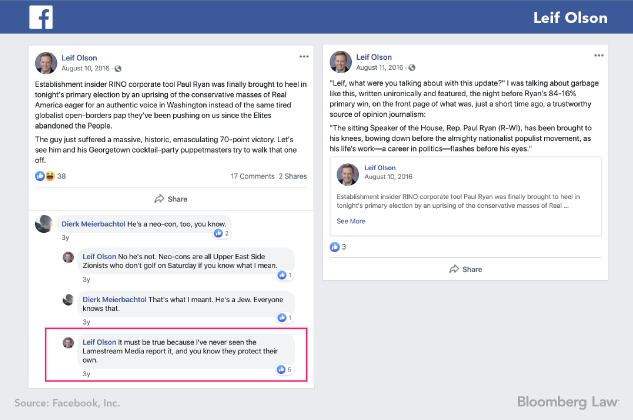 If one made only a cursory reading of the posts, one might indeed think that Olson was suggesting that House Speaker Paul Ryan was some sort of crypto-Jew and that the Jews look after their own. A closer reading, however, shows just the opposite.

That reading requires one key bit of context: Ryan had just defeated Paul Nehlen, a white supremacist anti-Semite who had been boosted by Breitbart, in his local Wisconsin primary. (Nehlen was later banned from Twitter after harassing many Jewish journalists, myself included.) Breitbart had hyped a Nehlen victory and a repudiation of Ryan; instead, Ryan won by nearly 70%. With this background, it’s easy to see that Olson’s post was brutally sarcastic from start to finish.

Mocking Breitbart’s breathless boosterism of Nehlen, he wrote: “Establishment insider RINO corporate tool Paul Ryan was finally brought to heel in tonight’s primary by an uprising of the conservatives masses. … The guy just suffered a massive, historic, emasculating 70-point victory. Let’s see him and his Georgetown cocktail-party puppetmasters try to walk that one off.”

Olson’s commenters immediately picked up on his sarcasm and piled on in Breitbartian tones. “He’s a neo-con too, you know,” wrote one. “No he’s not. Neo-cons are all Upper East Side Zionists who don’t golf on Saturdays, if you know what I mean,” Olson responded, imitating the thinly veiled anti-Semitic dog whistles of Nehlen and his alt-right backers, who had not so cryptically suggested that Ryan was a tool of the Jews. (In a fun twist, it later turned out that Ryan did have some Jewish ancestry, which led to him receiving … far-right anti-Semitic harassment.)

Now, it’s true that this sarcasm is a little opaque if one doesn’t know the Nehlen context. But it’s made considerably more opaque by the fact that Bloomberg’s reporter selectively cropped (or simply missed) the rest of Olson’s Facebook thread to leave out the comments which make clear that everyone involved knows that it’s sarcasm–and where Olson himself names and shames Breitbart. Here’s more of the thread, with the relevant omitted portions highlighted:

The omission of this essential context was likely why Bloomberg was able to get a condemnation from the Anti-Defamation League and why the Department of Labor pressured Olson to resign. The only other evidence Bloomberg adduces of Olson’s alleged anti-Jewish outlook? This rather amusing friendly joke: “A few weeks later, he took to Facebook again on the eve of the Jewish New Year Rosh Hashanah: ‘My Jewish friends, I wish you a happy new year. My non-Jewish friends, I wish you a happy Jewish new year.'”

Olson has understandably maintained his innocence of the charge of anti-Semitism, writing on his Facebook page: “I never thought I’d see the day when making fun of alt-right anti-Semites led to being branded an anti-Semite, but here we are.”

The entire episode ought to be an object lesson for reporters seeking to tackle this important topic. The media’s renewed attention to anti-Semitism as a serious and active force in our national life is commendable. Anti-Semitism in the Trump administration is real and warrants close coverage. But precisely because anti-Semitism has not received such scrutiny in the past, there is a lack of journalistic knowledge and expertise on the subject that leads to mistakes like this. Context and accuracy are crucial when reporting about anti-Semitism, just as they are for any other subject.

This post has been updated to reflect the correct date of Olson’s resignation, Sept. 30.

I don’t know Olsen and, if I did, don’t know if I’d agree with his politics. But his story is very upsetting and does no credit to Bloomberg News or to your profession. Thank you for writing about it.