White supremacists are using particular symbols to identify and target Jewish names. Now Jews and non-Jews alike are fighting back.

Spend any time around prominent opinionated Jews on the Internet, particularly on platforms like Reddit or Twitter, and you’re likely to encounter an odd anti-Semitic practice. White supremacists associated with the alt-right, many of them avid supporters of Donald Trump’s presidential campaign, like to highlight Jewish users for targeting with parentheses: (((Rosenberg))), for example.

As Mic reported, the Internet’s neo-Nazis even have their very own Chrome browser extension that automatically places these parentheses around Jewish names on web pages. But on social media, they typically add the symbols themselves to troll Jews and alert fellow bigots to a potential target. Mic’s staff, for example, received these charming tweets singling out Jews on their team: 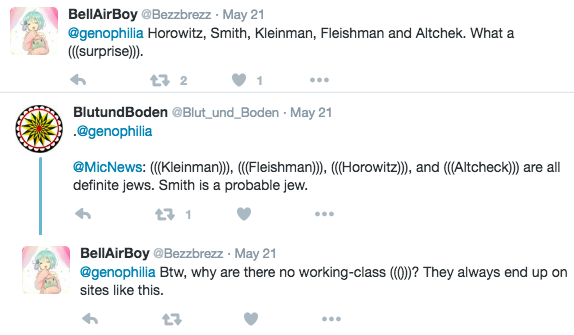 With a name like “Yair Rosenberg,” I might as well be called Jewy McJewface on Twitter. As a result, I’ve been on the receiving end of this sort of treatment for years, long before Donald Trump entered the political fray. Likewise, The Atlantic‘s Jeffrey Goldberg, being a Very Prominent Jew With Opinions on the Internet, has been a lightning rod for such abuse. So last night, he decided to preempt the neo-Nazis and put parentheses around his own Twitter username. It seemed like a good idea to me, so I tweeted this:

Want to raise awareness about anti-Semitism, show solidarity with harassed Jews & mess with the Twitter Nazis? Put ((( ))) around your name.

Then I went to bed. It turned out a lot of people—not just Jews—liked the idea. Some anonymous accounts even outed themselves as Jews to show solidarity. Muslims, Christians, and Hindus changed their names to show their support. As of now, hundreds of accounts have appropriated the Nazi symbols as their own.

If this is the election where anti-Semitism comes out, I don’t want to be left out. I want to be counted alongside my Jewish friends and kin

@Yair_Rosenberg oh man I’m Muslim this will confuse them

White Anglo-Saxon ex-Catholic here, but what the hell. (@Yair_Rosenberg @jonrosenberg)

It’s worth noting that the internet’s anti-Semites hate when their culture is appropriated by their opponents. For example, when internet users started repurposing Pepe the Frog, a meme racists had coopted, a white nationalist lamented:

Most memes are ephemeral by nature, but Pepe is not… He’s a reflection of our souls, to most of us. It’s disgusting to see people (‘normies,’ if you will) use him so trivially. He belongs to us. And we’ll make him toxic if we have to.

Which makes stealing the bigots’ signature symbolism for Jews all the more fun.

Thanks to everyone participating in this act of (((cultural appropriation))). Since the culture in question is Nazi, it’s permissible.